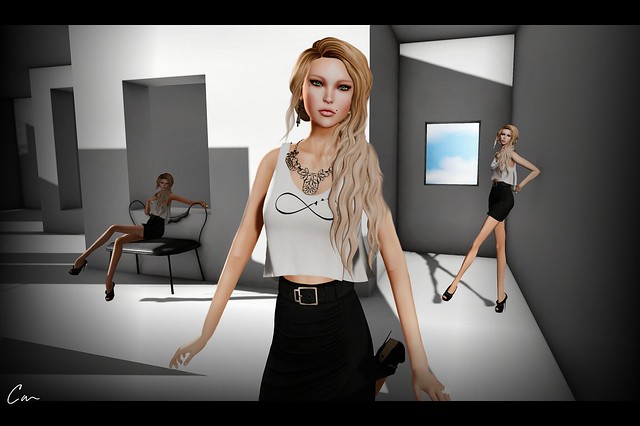 Okay, so I finally caved. I love mesh heads in SL and though I tried the first round of those from LeLutka and was suitably unimpressed by the style of the heads, I have to admit that the second batch was more geared to my style of avatar. After some debate, I decided on Stella, whom I felt had a more fresh and playful look to her, as opposed to the others. I like the curvature of the chin and jaw much more, the definition and the flirty set to the lips and the presence of- lo’ and behold, cheekbones! Nevertheless, I am having a lot of fun playing with the HUD, which offers so much more in the way of options and at a seriously smaller price tag than that of the Mesh Project.

Also new this week are skirts and cropped tops from ColdLogic, gorgeous and modifiable belts from Molichino and an expansive mesh pose prop from Exposeur for the 3rd Birthday Round of faMESHed. 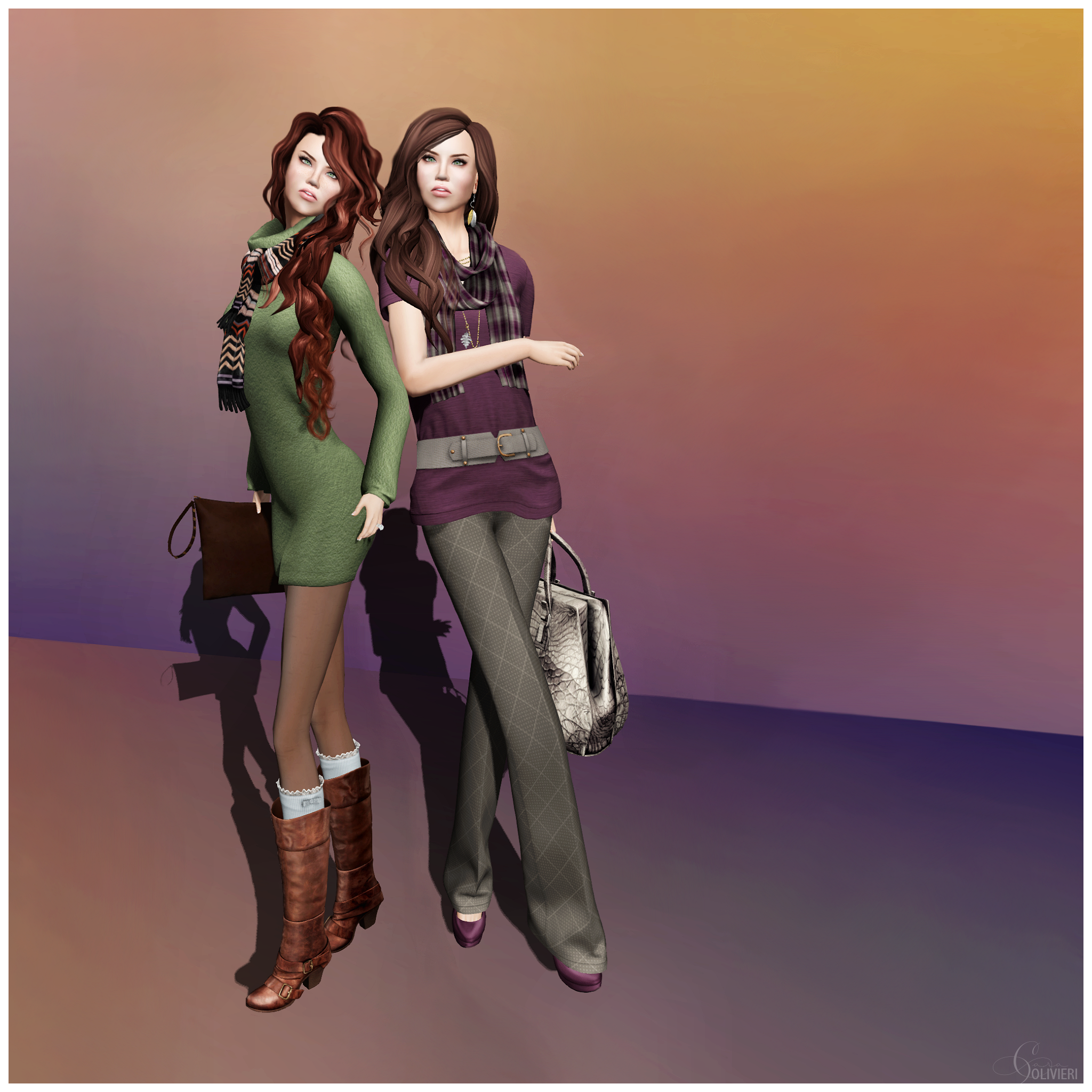 ColdLogic has some fabulous new Fall releases this week- including skirts, sweaters with scarves, dresses and pants. Stop by the mainstore to check them out!

Also this week are a the final days of the Arcade. I’m so sad to see it go, as always, but I’ve had loads of fun collecting and trading for everything on my list. 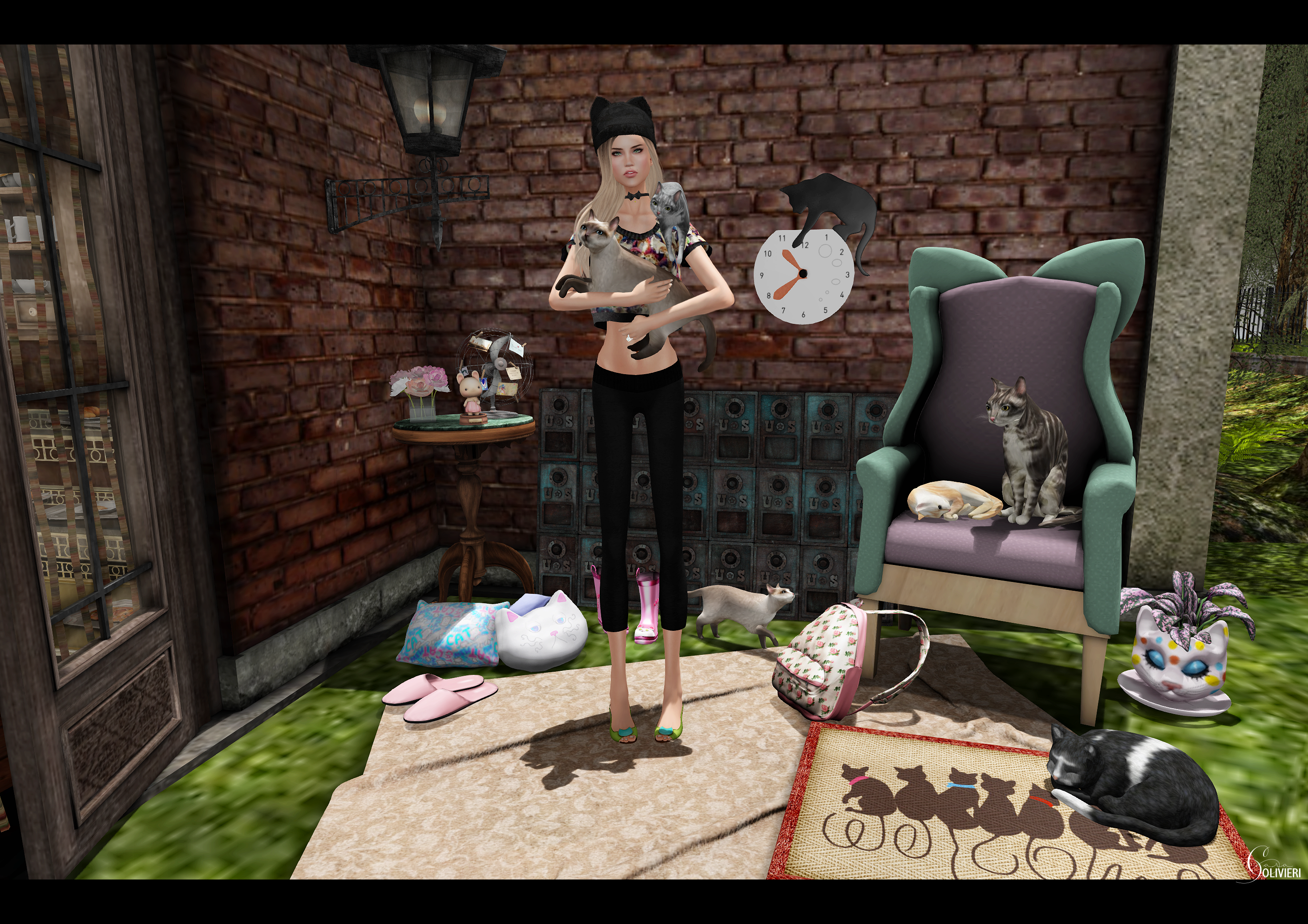 I couldn’t help but sing this Sheldon & Penny favorite while decorating my new 8f8 La Petite Joie Cafe from the Arcade with the entourage of cat products I’ve accumulated in just a few days time. It just so happens that the new round of the Oneword event also has a theme of cats and there are definitely some great pieces to psyche up any cat lover. 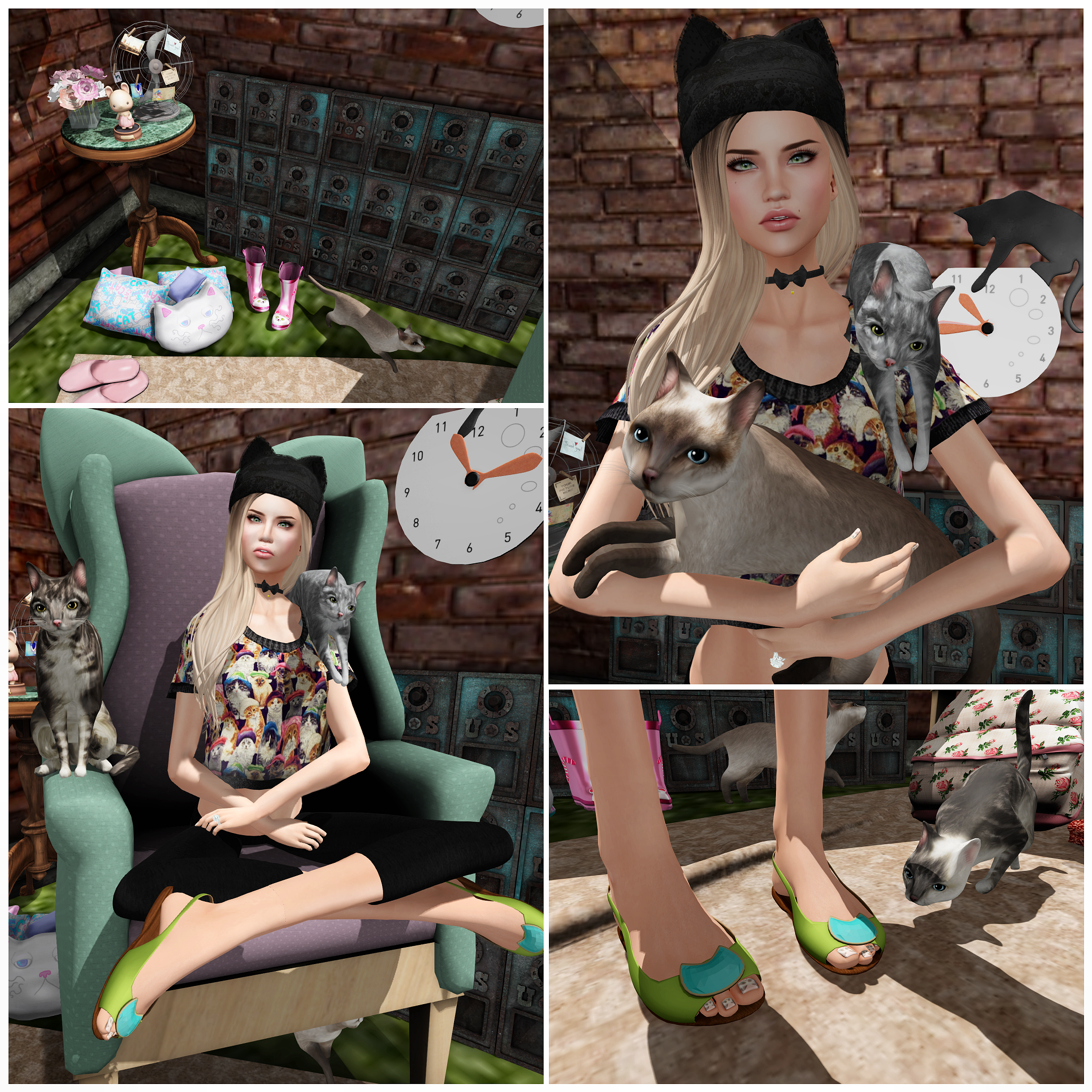 Not only am I playing the part of the crazy cat lady with my Fashionably Dead cat collection (complete with full customization menu) and wearing the inevitable printed sweater, but I’ve managed to snag some great accessories too, including Georgie Flats from LVLE in some adorable colors, hair from Pr!tty (complete with cat hat!) choker from Buttery Toast and some great nail appliers by Bella Elephante.

Both events run through the month of September, but don’t wait too long to grab up all of these great items and more before it’s too late! 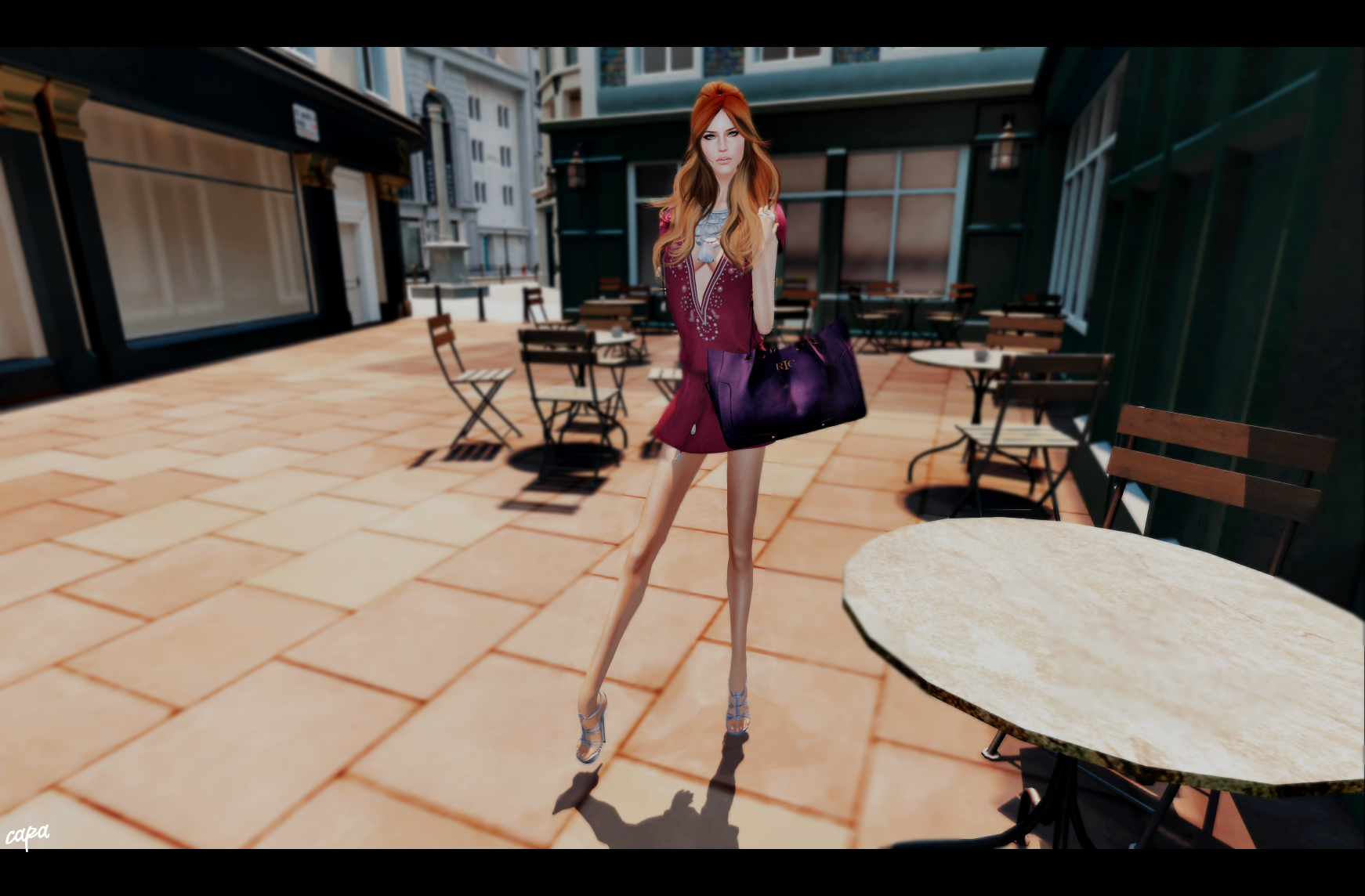 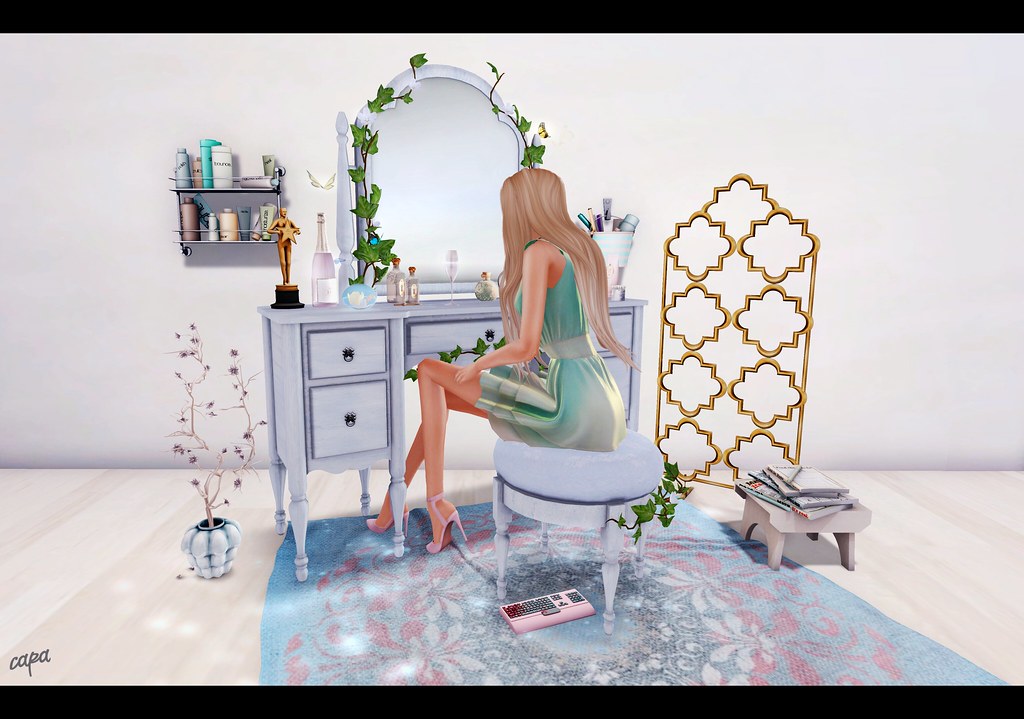 Cherelle Capra from Circa Living released this ‘Enchanted Meadow’ Fae inspired vanity set for the Fae Edition of the Genre Event. It’s mesh, it’s whimsical and it’s gorgeous! It comes in five colors with 24 poses and wearable vanity props. She’s also recently released a Mermaid Version for the same event (Mer Edition) so be sure to head on over and grab it at a great price before it’s too late!

ColdLogic also released the first of their spring line, featuring dresses, trousers and shirts in bright spring colors and fabrics. I’m wearing this ruffly seafoam colored dress that paired perfectly with this new hair from Exile for the Arcade. 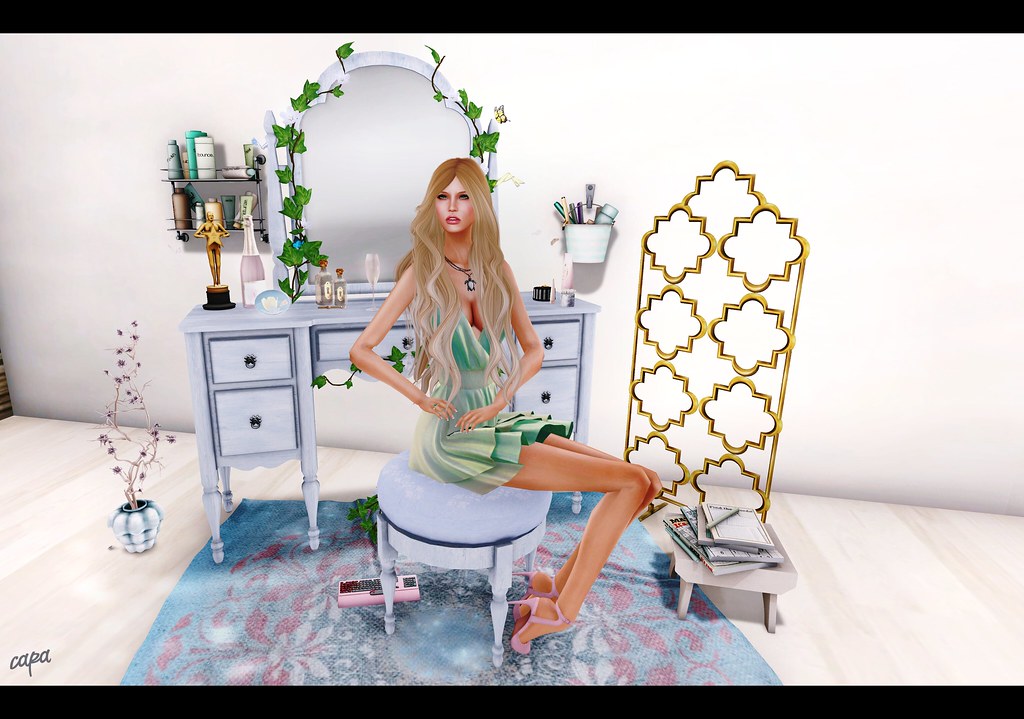 With Pose Fair 2014 just around the corner, I’ve had the privilege of seeing the new releases from Pose Fair first-timer Roquai. He has the most amazing poses prepared for this event, including the one shown above. Keep an eye on the Hottie Cooterati Blog for more updates as we get closer to the event!

ColdLogic has some new releases out this week- a trio of three different dress styles that come in a huge variety of colors and textures. What’s great is, the style I am wearing is completely customizable, so I traded out the original gray undershirt for a white one. You can do this for all of the colors, creating dozens of different and fabulous looks!

Also new from Sax Shepherd are these cross strap mules, which are an addon for the SLink medium height barefeet. The fatpack HUD is fully customizable and the shoes are super cute!

Location @ It All Starts With a Smile

ColdLogic has some great new summer releases this week! These new sexy summer bikinis come in four styles and eight color/texture choices each, a perfect way to kick start the next few months’ pool parties, lazy beach days or just catching some rays! If you’re looking for the perfect summer swimsuit, grab a taxi here to the coldLogic mainstore!

LaGyo – Love Me or Not (mint) (modified) & Alice Necklace (mesh)

Poses & Props from What Next & Purple Poses