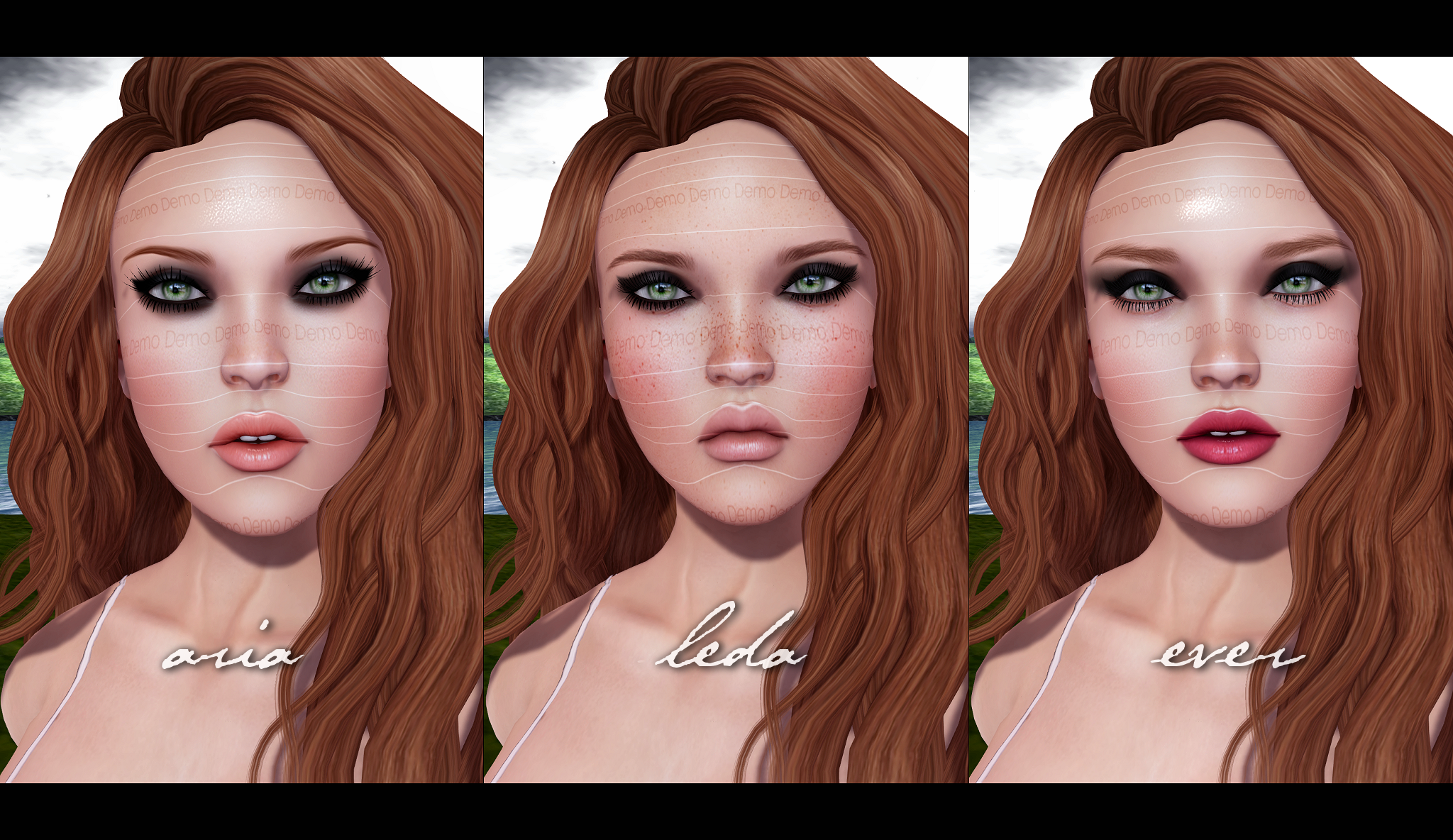 So, the big day has finally arrived for the premiere release of LeLutka’s new mesh heads! It’s been a long time in coming for a well-known brand to finally be releasing a mesh head that has so many features, and at a reasonable price! As much as I love my mesh head from the Shops, for a lot of shoppers, the 5k price tag isn’t exactly eye catching. Nevertheless, I decided to hop on over to grab some demos of the new heads, as well as the corresponding skins from Glam Affair. That the Maitreya mesh body is also in collaboration with these two- I admit I was super excited to see how things turned out!

So, I arrived home and began trying on the heads and mixing and matching the skins of Aria, Ever and Leda to see what kinds of looks I can come up with. I can honestly say that I love the HUD and all of the options capable with these mesh heads. The makeup tinting and additions, hair-bases, open/close eyes and mouth and even hiding the ears are all outstanding features. I also love that the sliders for face length actually work, because for some reason I could not make them adjust with my Mesh Project head at all. Though, that could just be me. So while I have hardly a criticism for all of the offered features. I do, however, have a few for the overall look.

To be perfectly honest, I was underwhelmed by the overall look of these three heads. Now, don’t get me wrong- while the execution is spot on and the quality is outstanding, the overall appearance of the trio are simply not to my liking. My observation? Drag queens meet boy band. The chin and jaw lines have little to no difference between one another and hardly any definition at all. The face is too long, for my liking, even when adjusting the sliders. Almost as if the overall face is too large for the features, but then again that could probably be attributed to the lower half of the face. The eyes are lovely, but the lashes, while mesh and of a great fit, are individual prims, which have turned me off lashes from LeLutka in the past, as they often appear jagged and are not the most photogenic attachments unless you are doing close ups. I also feel that from a frontal perspective, they have hardly any curvature and extend straight down and up, which make the eye appear tired.

All in all, the LeLutka mesh heads offer a full on mesh look for literally half of the price of the Mesh Project. The features are abundant and have great customization for makeup, lashes and hairbases. The downfall of the head though is definitely in that it cannot be used with the SL default avatar. Yes, I know, the default avatar will almost seem obsolete eventually, but there are just too many things that even the best mesh body cannot accommodate at the moment, that make the LeLutka head unusable for those not willing to wear a mesh body to go with it.

So,while ease of operation, quality and features I give these new mesh heads an A, the overall designs gains, perhaps, a solid C+ from me. Of course, I will continue to play around with it, as I have a feeling that with a few hours worth of adjustments and mixing and mashing, something great can happen.

On a side note, the new LeLutka mainstore is gorgeous, so definitely be sure to admire the new build while trying these mesh heads on and forming your own opinion. Feel free to let me know what you think in the comments!